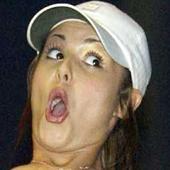 STOP press. Having heard from Amanda Holden that Cheryl Cole is “probably” in love with Ashley Cole, heat magazine says the nation’s sweetheart (that’s Chezza – as you were, Amanda) is giving Ashley one “LAST CHANCE”.

Cheryl has set her sights on an “August” reunion. And you can read all about the “SECRET TALKS” inside the mag.

END_OF_DOCUMENT_TOKEN_TO_BE_REPLACED 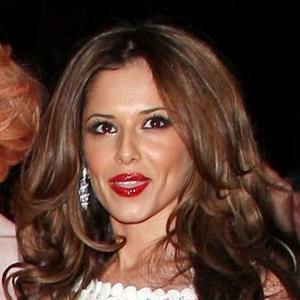 THE “WORLD EXCLUSIVE” on the Daily Star is that Cheryl Cole has a “NEW MAN”. This event is given full throat in the front-page headline:

Cheryl says she has “found the perfect man who she could be with forever”. Who is it? Him? Him? Why, it’s Black Eyed Peas front man Will.i.am.

END_OF_DOCUMENT_TOKEN_TO_BE_REPLACED

The Weigh In: Private Nadine Colye At ‘War’ With Cheryl Cole 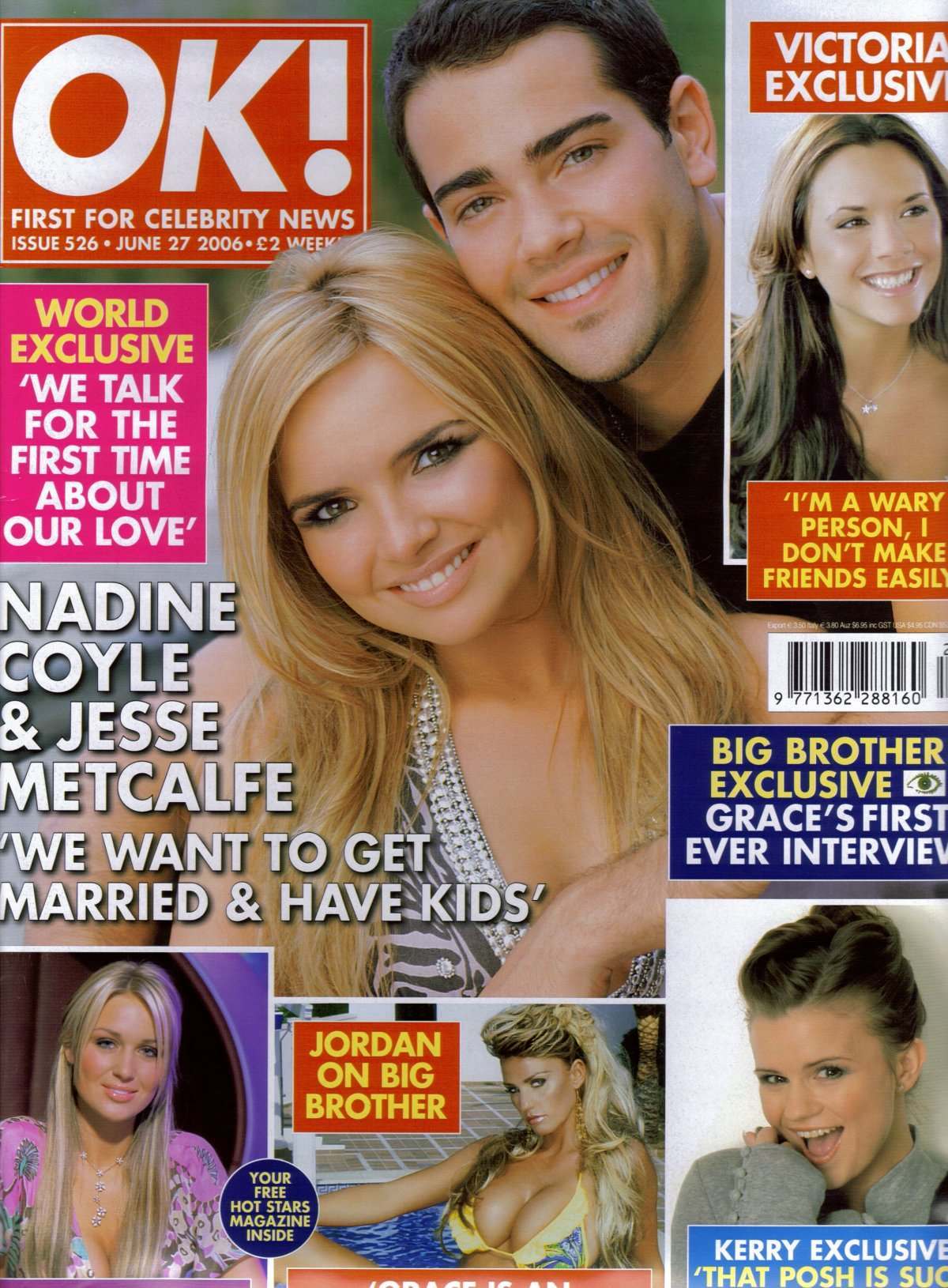 YOU wait an age for an article of Girls Aloud’s Nadine Coyle and then you get two at once. heat magazine leads with:

This is the tale of Nadine’s war with Cheryl Cole. Or as heat puts it:

A source “close to the star” [that’s Nadine] tells us that “Nadine tries to keep very private and believes that her success will come through her talent and not any kind of media circus that might surround someone’s private life”.

Is this the same Nadine Coyle who appeared in OK! magazine canoodling with then lover, Jesse Metcalfe, the star of TV’s Desperate Housewives?

END_OF_DOCUMENT_TOKEN_TO_BE_REPLACED 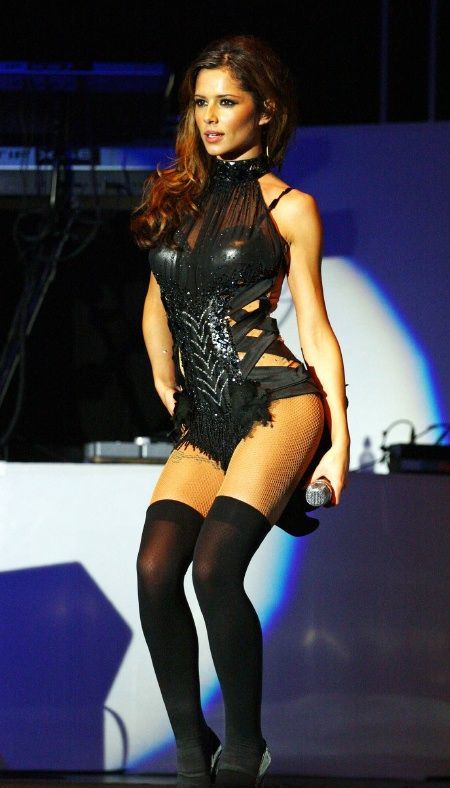 ASHLEY Cole’s knickers are the subject of Sammi Fugill’s indelible memory banks. Sammi dated the Chelsea and England player before he hooked up with “nation’s sweetheart” Cheryl Cole.

Sammi tells heat readers that he’s glad she had the “self-respect” to dump Ashley after she claims he made pass at her mate. She then tells us that sex with Ashley was “sweaty”, respectfully.

END_OF_DOCUMENT_TOKEN_TO_BE_REPLACED

Peter Andre Is ‘Taken Out’ And Katie Price ‘Explodes’

IN heat magazine “JORDAN EXPLODES”. The cabin pressure aboard those trans-Atlantic flights? It can happen. Irena D. was on her way from Moscow to Los Angeles on an unnamed airline when her chest spread itself out. Irena DDD cannot be traced.

It turns out that Katie Price has not exploded in the literal sense. But she has screamed:

“How dare you date other women!”

Katie is said to have been put out that Peter Andre had been working Maddy Ford in a sponsored shag. Says a source:

“The worst part is that the kids were there and saw and heard everything.”

Princess TenaLadyMe and Junior Peter are all ears and eyes. When they get together for their stage show version of Lucille Ball and Desi Arnez I Love Lucy, they will surely spill the beans.

“It was awful,’ says our source. Junior didn’t really understand what was going on and she was in the background telling him what to say. She was saying to him, ‘Daddy’s a liar. Look Daddy’s kissing another girl… See how Daddy treats Mummy now. That girl is called Maddy and – that’s Daddy’s girlfriend. Ask him about it Junior.”

No need. Maddy Ford has been speaking to the press about it all. All Junior need to is read.
Says Junior, now with a speaking part:

The source then tells us:

“That’s the worst part – he stuck to his word and yet she still went mad and tried to use it against him.”

Poor Peter. And its get worse, because heat announces in a headline:

A hit on the pop acorn? Is death the next logical step on his career ladder? No, dear reader. This is a contest for readers to send in videos explaining that they’ve got what it takes to date Peter – which from an outsider’s viewpoint seem to be a massive chests, hair extensions and a speed dial to the tabloids…

Me And My Chest: Peter Andre’s Career in Pictures
Katie Price career in pictures (NSFW)

Amy Winehouse And Blake To Remarry In 13 Steps 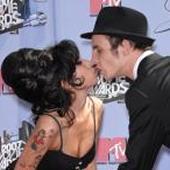 AMY Winehouse and Blake Fielder-Civil are back together. Heat magazine leads with a picture of the pair in a canoodle.

“Amy admits: ‘We’re addicted to each other.”

Heat meets Blake at his flat in Sheffield. All good, then. Only, heat speaks of friends being “terrified” and wracked with “fears” that Amy and Blake will be less than good for each other. These “friends” who sue heat like a therapist to share their private terrors need to ask themselves this: what hurts more, unrequited love or the removal of a “Blake” tattoo from your left bosom?

END_OF_DOCUMENT_TOKEN_TO_BE_REPLACED

Katie Price Tries For A Baby With Alex Reid: Pictures

KATIE Price and Ales Reid: Tango & Gash’s working model Katie Price has been on the Capital Radio Breakfast Show and GMTV. Anorak spotted her and took photos. Says Katie: “Me and Alex so want kids – well, we are trying, so let’s hope, let’s hope.” Let’s hope for Haiti. “The reason we got married in Vegas is because you can’t get married anywhere else unless you’ve been divorced for a certain amount of days. There was no Elvis or – you know, it wasn’t tacky at all. In fact, the pictures are absolutely gorgeous.” As heat magasine says: the weding is a “FAKE” and “Jordan is trying to get pregnant even as we speak.” Alex is in India. Picture that: 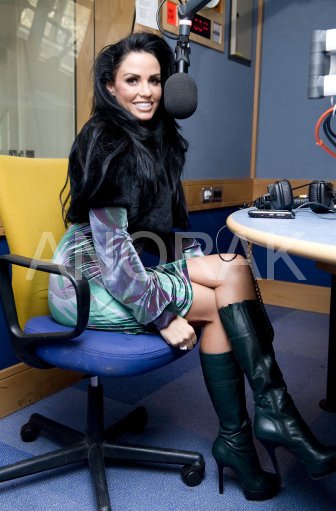 Katie Price poses for photographs at the Capital Radio Breakfast Show, at the Global Radio studios in central London. 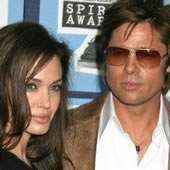 HEAT magazine claims on its front cover to be “bursting with glee” as it delivers the headline that Brad Pitt’s lover Angelina Jolie is “INSECURE”.

SHE USED TO BE FRESH-FACED AND CAREFREE

That was then. She’s

Feel the glee. She’s also a mother many times over and older and looking, well, better than you.

Angelina’s Jolie’s changing looks are contrasted with Lily Allen’s, a homegrown girl who has “WON HER BODY BATTLE”.

END_OF_DOCUMENT_TOKEN_TO_BE_REPLACED

X Factor: Stacey Solomon Says It Was ‘Rigged’ For Joe McElderry To Win

X FACTOR bronze medallion winner Stacey Solomon is on the cover of heat magazine, and she’s telling readers: “I reckon Simon rigged it!”

Inside and the shocker news is couched in Stacey adding, “Only joking.”

END_OF_DOCUMENT_TOKEN_TO_BE_REPLACED 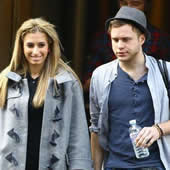 Caring Ben than says that his brother is – get this – “very private”, was “devastated” when his girlfriend and he parted. And then we get the best part about how Ben and Olly are different:

“I was thinking that the other day. You know, like Michael Jackson used to be very different off screen, but when he was on stage it was like, ‘I’m here. This is what I can do.’ Olly’s exactly like that.”

END_OF_DOCUMENT_TOKEN_TO_BE_REPLACED 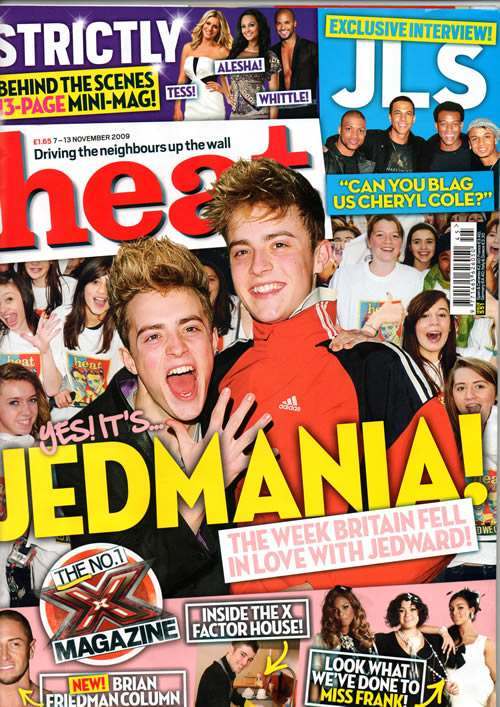 ALL the UK mags want to be home of the X Factor, to become the official organ that fans will reach for to read about their fave show’s wannabes, stars and judges. This week’s Heat mag, makes its play, leading with “JEDMANIA”, a tribute to John and Edward Grimes, the X Factor’s answer to America Idol’s Sanjaya Malakar.

For those of you not au fait with Mr Malakar, he was the non-singing, non dancing performer whose hair styles and uselessness kept him on the show week after week. He only failed when all the other acts copied his moves and style and he ended up looking cocky.

END_OF_DOCUMENT_TOKEN_TO_BE_REPLACED 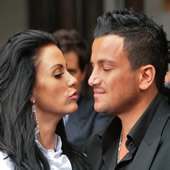 HAVING seen the Heat video, in which Katie Price tells of going bald in The Priory, the woman who found fame as Mrs Peter Andre answers Heat readers’ questions.

Heat refers to Katie as Jordan/Kate struggling to see past the marketing scam that pits Katie Price (mother) against Jordan (slapper). Any differences become further blurred when Katie lifts up her dress to show off her knickers.

Katie is ready now to answer questions with her fearless candour – “And she’s ready to answer literally anything.”

Lucy Archibold: How long after meeting Alex Reid did you sleep with him?
KP: That’s my business and no on else’s.

END_OF_DOCUMENT_TOKEN_TO_BE_REPLACED

‘Bald’ Katie Price Is ‘Down, Depressed And In The Priory Too’

KATIE Price Is ‘Down, Depressed And In the Priory Too’.

Is this a rare moment of clarity from Our Katie as she makes ready to read a trail for her interview in heat magazine? No, it’s just a joke. Really.

Hey, Peter Andre – there’s a song in this: Inania.