Who carved a massive dick into the Godalming butcher’s parking space? 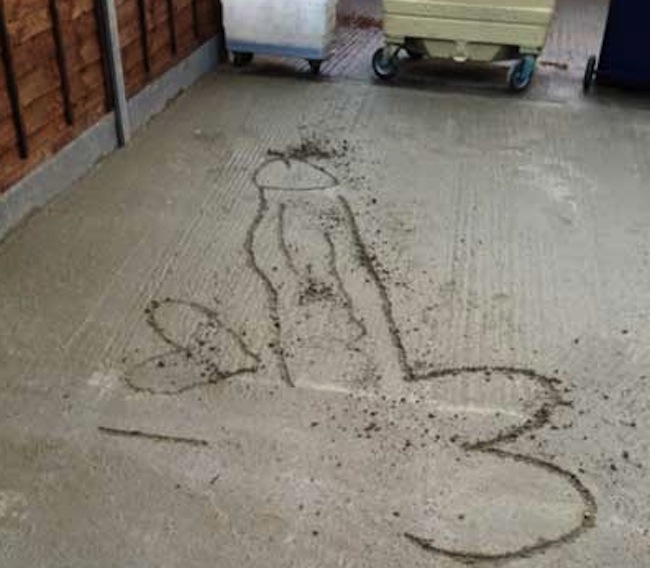 BAD Drawings of Dicks heads to Godalming, Surrey, where butcher Simon Thornton has spotted the large penis cut into the cement behind his shop. Mr Thornton, who is local councillor, had invested £3,500 to cover the three parking spaces. The cement was wet when the artist struck. Says the butcher:

“I was happy with how it was all looking and locked up and went home for the night. But when I came back the next morning I was faced with the image. It is huge. I can’t really afford to have it all re-done so I have done my best to scrub it out and make sure I place my car carefully over it every day. I told PCSO Dan Burrel about it but no more action has been taken. I don’t think it was a personal attack, just mindless vandalism.”

END_OF_DOCUMENT_TOKEN_TO_BE_REPLACED

Wambui the Zebra puts out cigarettes with his urine (video)

OTHER than stopping traffic what use is a zebra? Well, Wambui the Zebra has a keen sense of civic duty. He puts out cigarettes. Sure, he creates  a mess when he wazzes on them. But as soon as the absorbant sloths arrive, things are soon cleaned up…

NOTE to adolescents, jihadis, traffic wardens, the people who run police driver awareness courses, ‘Nick’ who asked far too many questions on one such course, men who stand in the shadows beneath trees to ‘catch’ speeding motorists, everyone at Volvo and Tony Blair : toy helicopters.

END_OF_DOCUMENT_TOKEN_TO_BE_REPLACED

The 10 creepiest thing your child has said to you 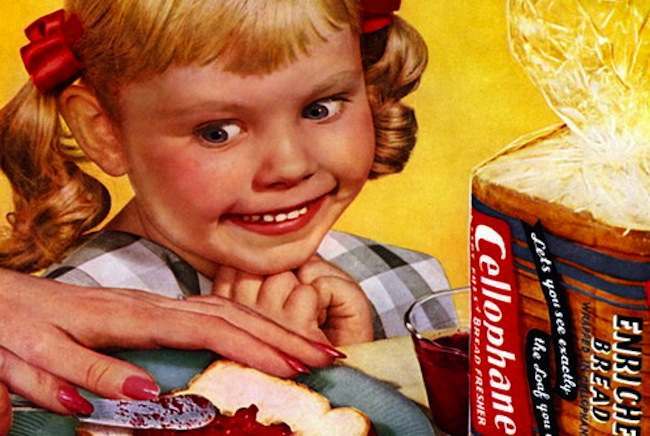 WHAT’S the creepiest thing your child has said to you? Reddit asked the questions. Thousands answered.

x_y_zed: I was on a bus recently and we were stopped outside a walk-in clinic. A little girl in the seat in front of me turned to her dad and said, “Death is the poor man’s doctor.” And that was that.

Unfortunatebirthmark: I was tucking in my two-year-old. He said “Good bye dad.” I said, “No, we say good night.” He said “I know. But this time it’s good bye.” Had to check on him a few times to make sure he was still there.

END_OF_DOCUMENT_TOKEN_TO_BE_REPLACED

IN this video, a man slaps the woman he’s dancing with.

END_OF_DOCUMENT_TOKEN_TO_BE_REPLACED 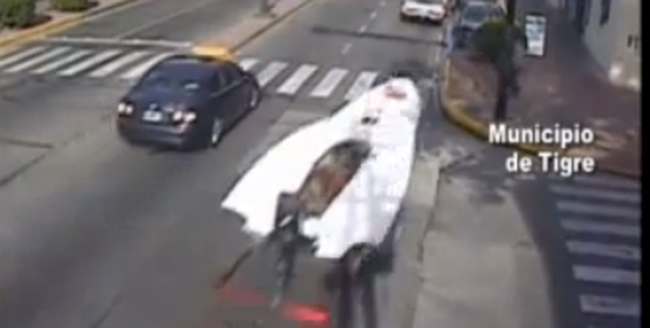 TO Tigre, Argentina, where a man crossing the road has narrowly avoided being run over by a speedboat. The boat was being towed by a car. The car’s driver has been fined. 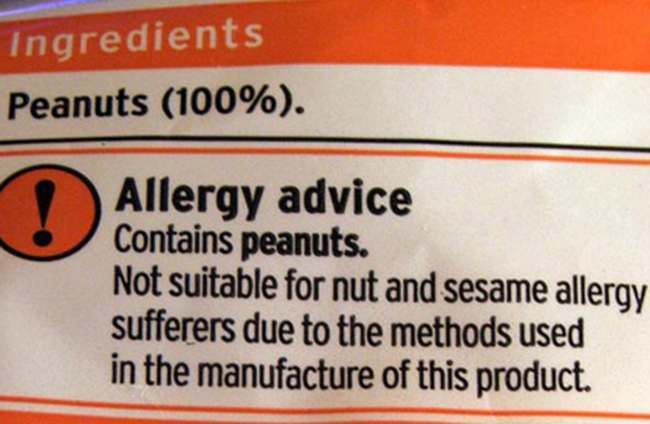 NO. You cannot buy monkey nuts from branches of Boots in Lancashire. The store chain has withdrawn its 350g bags of monkey nuts because the label fails to state that the monkey nuts contain (you’re ahead of us) nuts.

The Food Standards Agency (FSA) has ordered 300 packets of 350g Whole Hearted Roasted Monkey Nuts to be removed from sight.

“It is our responsibility as retailers to accurately record allergy advice. In this instance, we felt a responsibility to recall the product and issue a notice to our customers who might suffer from a specific peanut allergy.”

“If you have an allergy to peanuts, please do not consume this product and return it to your local store for a full refund. No other products are affected by this issue and we sincerely apologise for the inconvenience caused.”

Did a Tesco delivery man urinate on the stairs?

“I went up the stairs and there was a steaming wee on the first floor communal area. I didn’t dip test it but I’m 99.9 per cent sure it was urine. It didn’t smell at the time because it was fresh but it didn’t take long for it to cause a bit of a whiff. I don’t get it. I mean, we’ve all been caught short, but there’s a car park outside and a bin area. There’s no need for that. It’s not even like it’s concrete – it’s a new carpet!”

END_OF_DOCUMENT_TOKEN_TO_BE_REPLACED 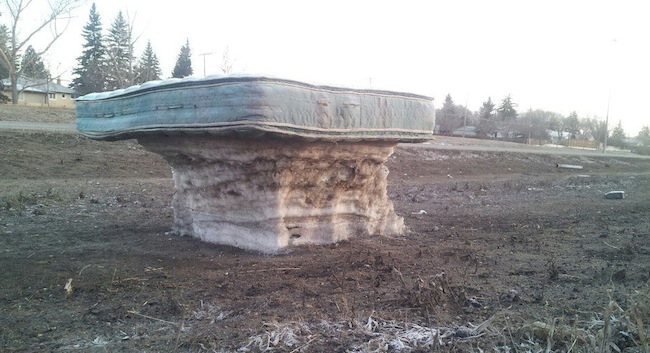 Hurry and go see this natural wonder before it’s too late! They call it the “Saskatchewan Hoodoo”. A mattress and some leftover snow beside Ring road in Regina. And just when you thought Paul McCartney was the only reason to drive to Regina…

END_OF_DOCUMENT_TOKEN_TO_BE_REPLACED 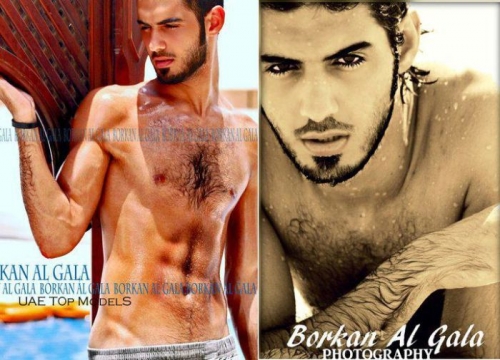 THIS is “the show that unlocked the web’s passion for eating carrots.” Jon eats one pound of carrots per episode.

END_OF_DOCUMENT_TOKEN_TO_BE_REPLACED 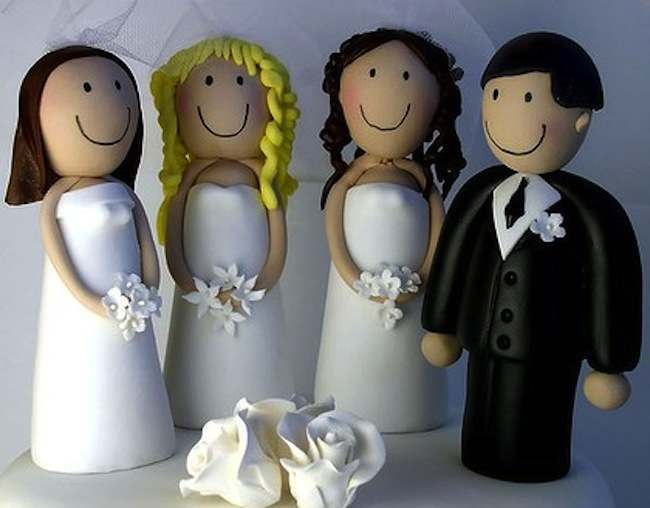 GULF News reports that a Saudi Arabian teacher told her lover she would only agree to marry him if he also married her two friends.

At first reluctant, under pressure from his and his bride’s family he later accepted. He then rented a flat for each of the women in his block.

This sounds like a decent deal for the women, no? They get a home, a husband they don’t have to live with. He gets loveless sex with at least two of the three different women. Moreover they called the shots.

Might it be that women are not repressed as we imagine?

Women stumbles upon a tiger in the toilet 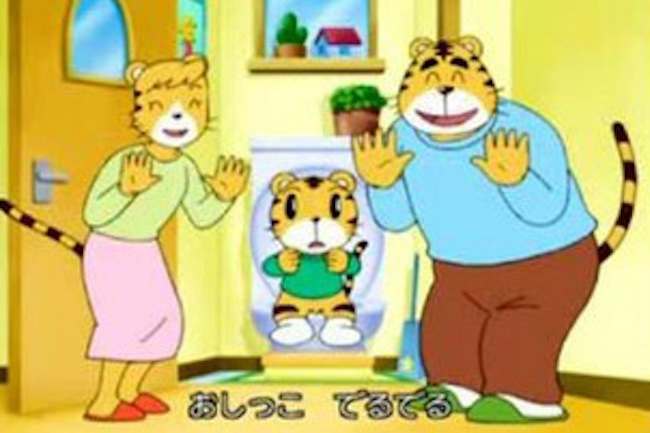 OTHERS might have panicked. Others might have picked the cat up by its tail and skinned it. But when Jenna Krehbiel walking into the toilets after the evening show at the Isis Shrine Circus on Saturday at the Salina Bicentennial Centennial Center in Kansas and saw a tiger, she just turend and walked back out again, as one might when encountering Noel Edmonds signing autographs.

She tells her local paper:

“I went in to use the bathroom, and a lady came in to get her daughter out and said there was a tiger loose. I didn’t know it was in the bathroom, and I walked in the (open) door, which closed right after I had walked in. I saw the tiger; it was at most two feet in front of me, and I turned around calmly and walked back toward the door. Someone opened the door and said get out… You don’t expect to go in a bathroom door, have it shut behind you and see a tiger walking toward you.”

Apparently the tiger was not so well trained that it was using the ladies toilets. (If it were, it had forgotten its book and handbag.) Rather, it had escaped and was on the prowl.

So. Why didn’t Krehbiel scream? Was it fear that caught her voice? Nothing of it. She says she was cool because she’s trained as a social worker:

“I’m always on alert, and it was easy to walk out; that’s how I am trained.”

She’s trained to walk away? She adds:

“My daughter wanted to know if it had washed its hands. That was her only concern. I think that shows the thoughts of children and that they wouldn’t have known there was danger.”

Of course this is America and we wonder what would have occurred had the tiger been an anxious male holding a gun?

Spray paint snifer was protecting himself from devil worshippers 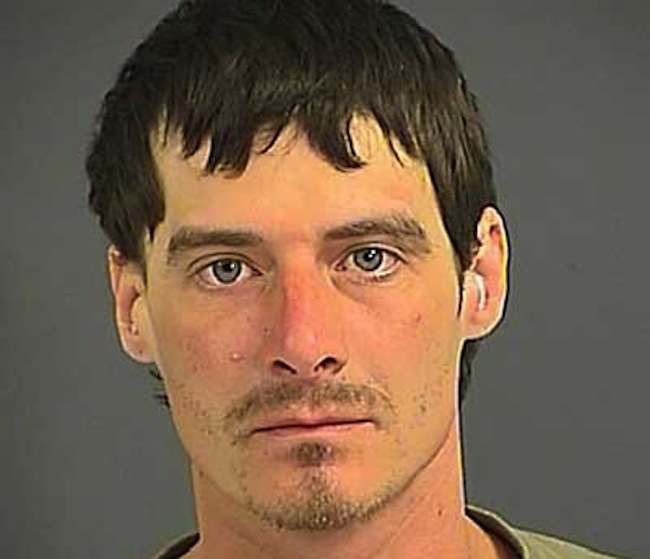 WHY was 32-year-old Carl McGuirt IV from Charleston, South Carolina, inhaling spray-paint fumes, daning in circles and clutching a knife in the woods? Because he was trying to catch “devil worshippers” aiming to sexually assault him.

“He stated that he sprays the gold paint and places the rag on his mouth. When the devil worshippers come after him and try to orally sexually assault him, the paint gets on their genitals, and he can use that information to prosecute them.”

It’s a crazy plan but it might just work…

McGuirt has been charged with sniffing aromatic hydrocarbons, which is, apparently, a crime. 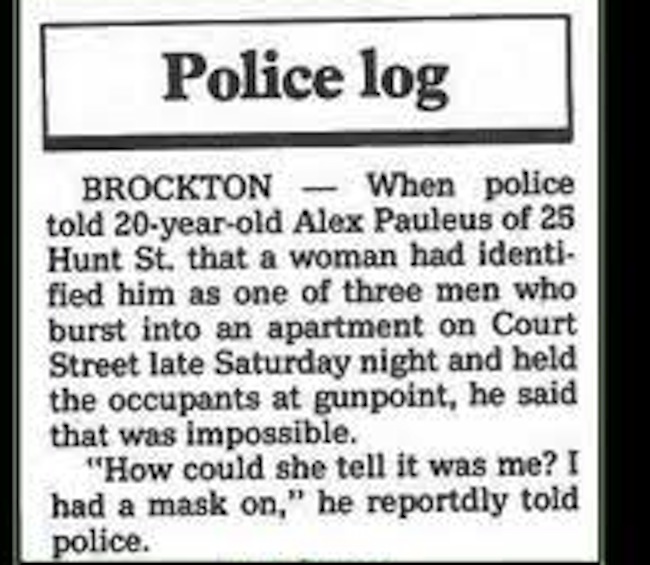 MOST criminals didn’t listen in school, which is precisely why they end up robbing houses rather than learning how to evade tax. Such is the way of the world.

One crook showed particular stupidity after he phoned the police whilst he was in the middle of breaking into a house.

Marius Ionescu hid under a bed while burgling a house in Romania. He contacted emergency services after hearing a strange noise, assuming it was the sound of another burglar.

END_OF_DOCUMENT_TOKEN_TO_BE_REPLACED

SO. There you are on the Taipei Metro. Your lover /sister / cousin is riding the train with you. She’s shy. The man across the asile is filming. She puts her head on her man’s lap. He then puts his anorak delicately about her shoulders, gallantly.

END_OF_DOCUMENT_TOKEN_TO_BE_REPLACED 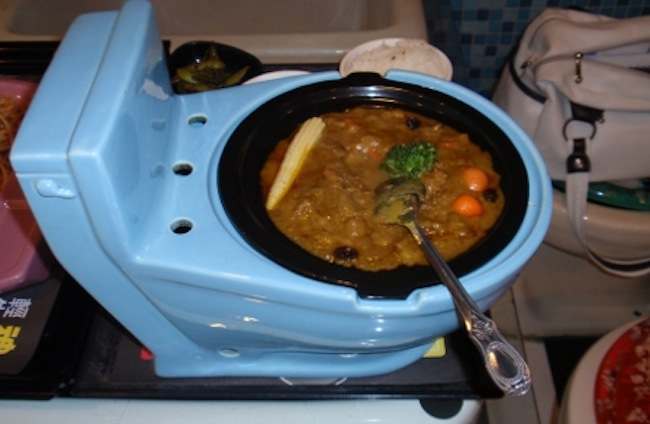 ANUSHA, 28, from Mumbai, India, hadn’t been to the toilet for 45 days when she visited the Nova Specialty Surgery Centre in Chembur.

A quick test located a “football-sized” faecal mass stuck in her insides.

END_OF_DOCUMENT_TOKEN_TO_BE_REPLACED 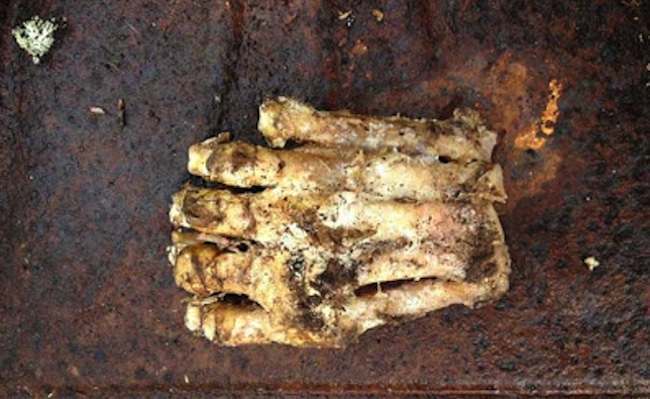 CAN a place be a victim of nominative determinism? We ask in light of a discovery in Quincy, Massachusetts. Quincy was the TV based on the investigations of Quincy ME, a pre-CSI Los Angeles County medical examiner. We need him now to take look at what two boys found in the woods around Quincy.

Sgt. Steven Leanues says it looks like a festering foot.

END_OF_DOCUMENT_TOKEN_TO_BE_REPLACED

TO Arthunkal beach, India, for the annual arrival of the lemming fish. You can’t help but wonder what force is pushing the fish towards the beach? Bigger fish? Officer-class fish reenacting the Charge of the Light Brigade? The Tesco ranchers rounding up the new breed of GM seahorse?

Ohio woman is ‘too fat to tan’ 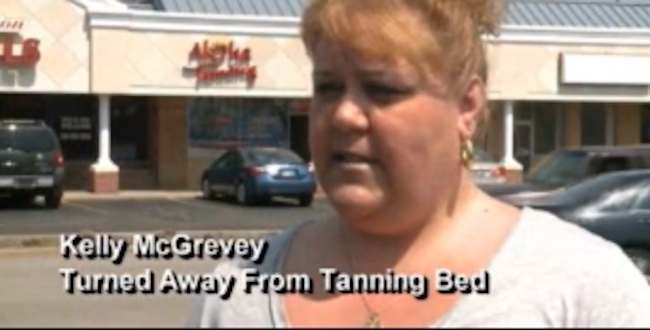 KELLY McGrevey is too fat to tan. How can that be possible? An “obese” woman would get to the sun’s rays first. Lie her on her side, back or front and Kelly’s hips, bosom and buttocks would surely create a large shadow for many others.  It’s a wonder that a star who wanted to avoid the sun’s ageing rays, such as Madonna, say, hasn’t hired a larger person to stand sun-side of them at all times.
END_OF_DOCUMENT_TOKEN_TO_BE_REPLACED

Vacuum Cat is here to terrify you

BECAUSE cats are utterly terrifying, here’s video of a cat learning to talk to the wind:

Two-tonne bell falls on man, just like in the cartoons 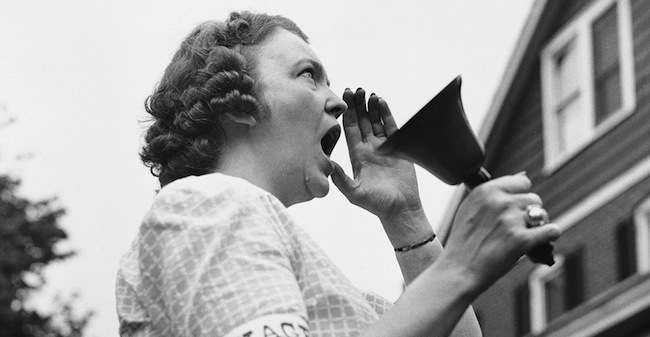 THERE are a number of injuries suffered in cartoons that would be unbearable agony in real life. How funny would it be to see a loved one getting hit by an anvil? Would you laugh if someone hit you repeatedly in the face in a bid to turn your teeth into piano keys? How about watching a man fall to his death while dressed in an Acme bird costume?

While all these things would be gut-wrenching to watch, sometimes, it does end in mild, but amusing peril.

Take for example, a man who had a two-tonne bell fell on top of him at a temple. Lin Wang was visiting with a friend that decided he was going to frantically ring the bell while his mate was standing underneath it.

END_OF_DOCUMENT_TOKEN_TO_BE_REPLACED

Men deported for being too good-looking 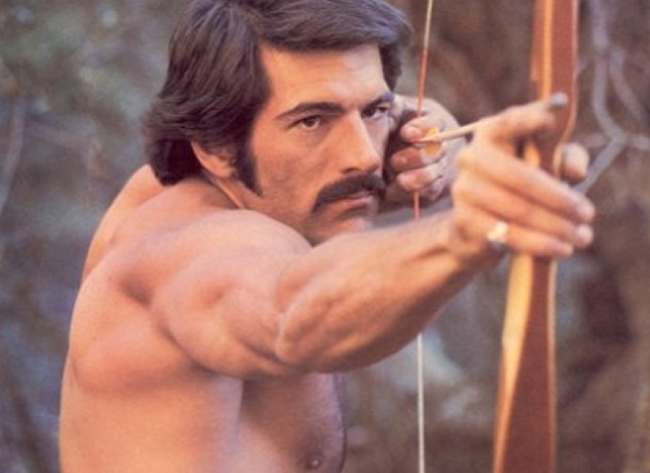 HANDSOME people have dreadful lives don’t they? All those sexual advances, grooming and deportation! You’re querying the latter? Well, that’s what happened to three fellas from the UAE who were whisked away from a festival in Saudi Arabia for apparently being ‘too good-looking’.

Janadriyah – an annual shindig in Riyadh – was temporarily stopped on Sunday while these three devilishly handsome men were escorted from the event.