Grandstanding For Haiyan: The Beckhams Sell Their Clothes

THE Beckham – that’s David and Victoria – have given lots of their old clothes to be sold off to help the victims of Typhoon Haiyan that hit the Philippines with huge loss of life.

Good for them. So what if it’s grandstanding. So long as it helps the victims, all to the good.

Some people have put the kit up for resale on eBay. And good for them, too. Actually wearing a Beckham cast-off is a bit creepy. 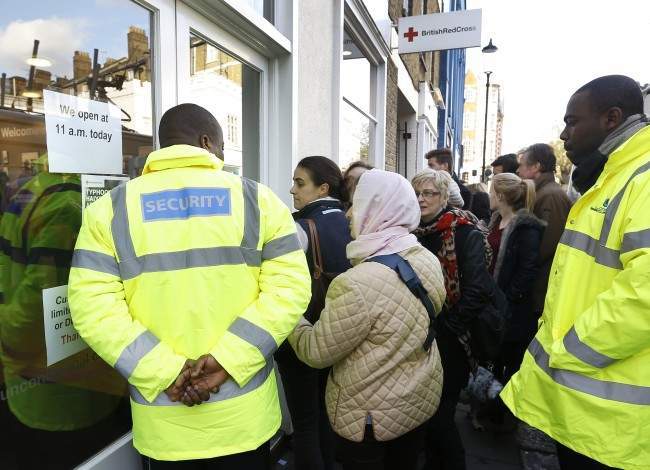 END_OF_DOCUMENT_TOKEN_TO_BE_REPLACED

ABBEY Clancy, Strictly Come Dancing pro-celeb hoofer and wife to footballer Peter Crouch (What would you be if you weren’t a footballer, Peter? PC: “A virgin”) wore Julien Macdonald’s patchwork of seaside beach flags to The Brave Gala at Dorchester Hotel, Park Lane, London. Signs are that Dear Abbey thought it was contest for who could be bravest.

Our pick of the photos, though, is not Abbey holding the seat of her patriotic table runner in the manner of Justin Bieber with a full pull-up, but she and Julien gazing into each other’s teeth. 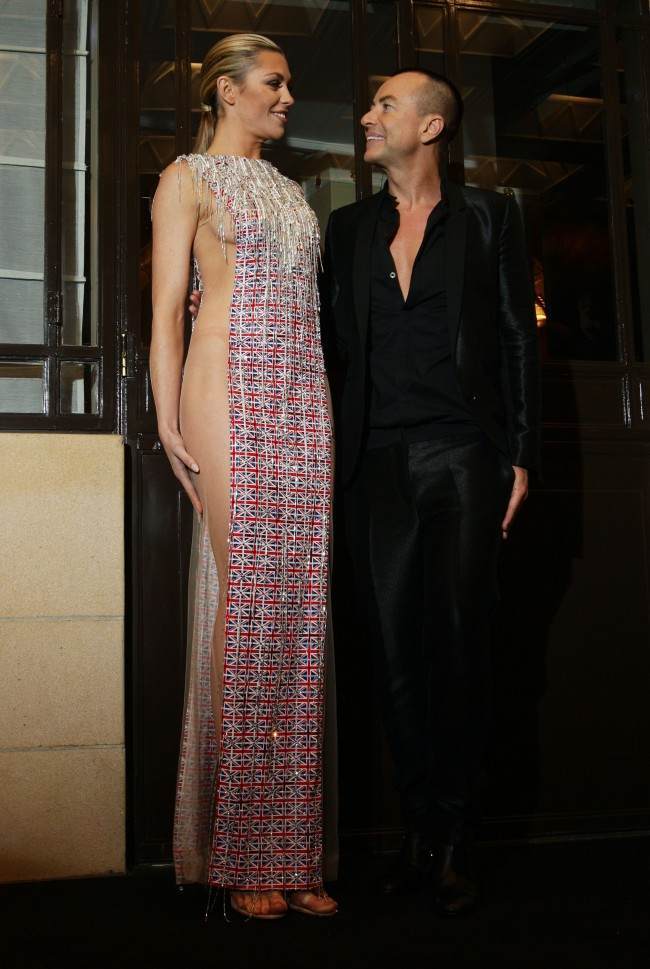 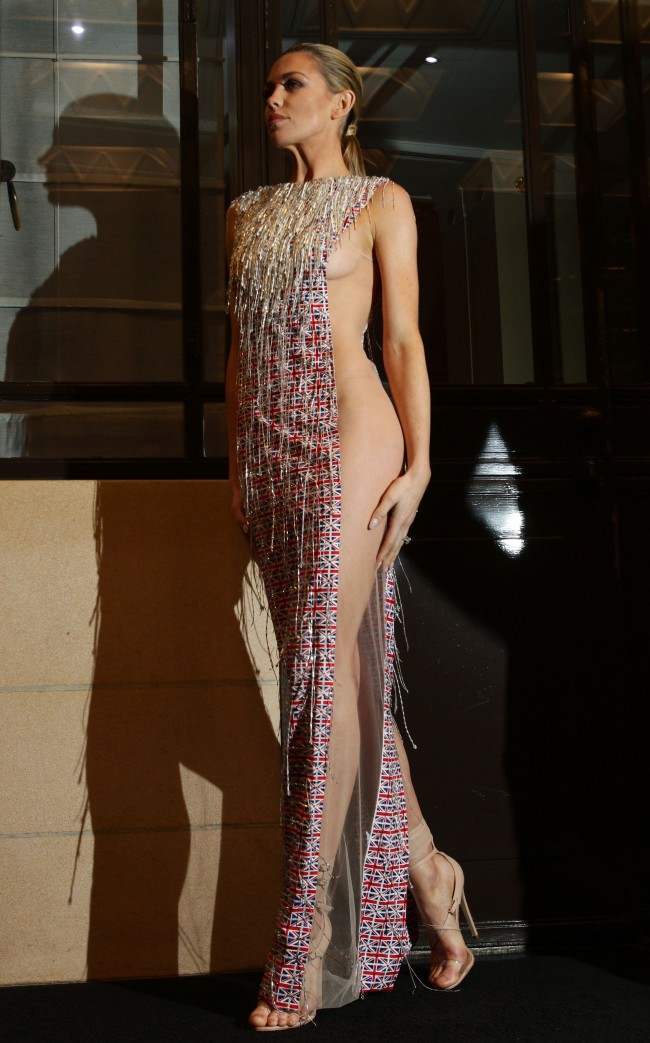 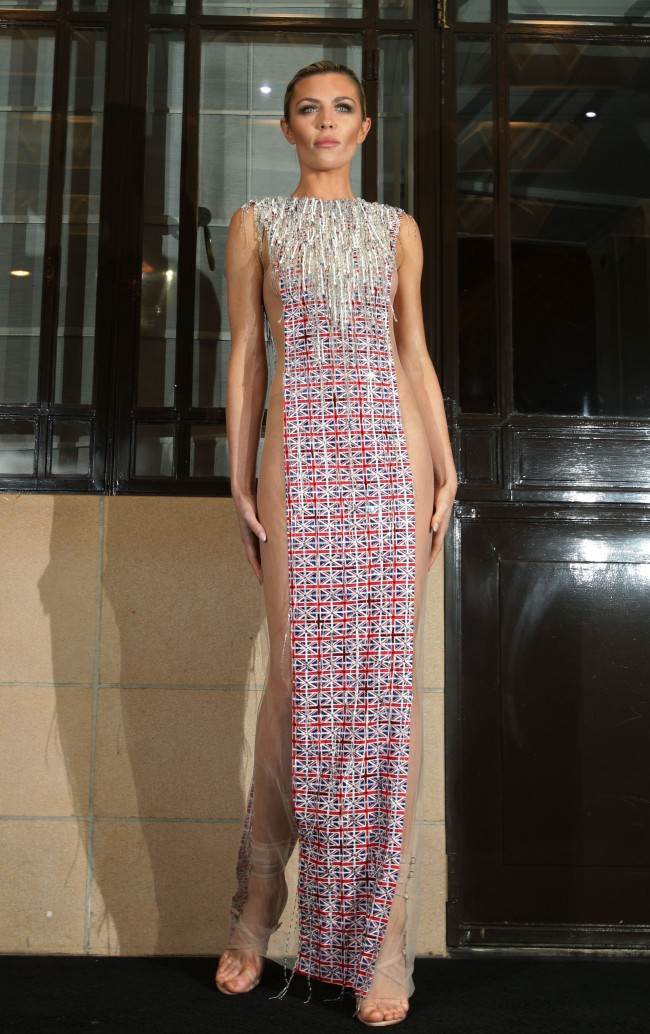 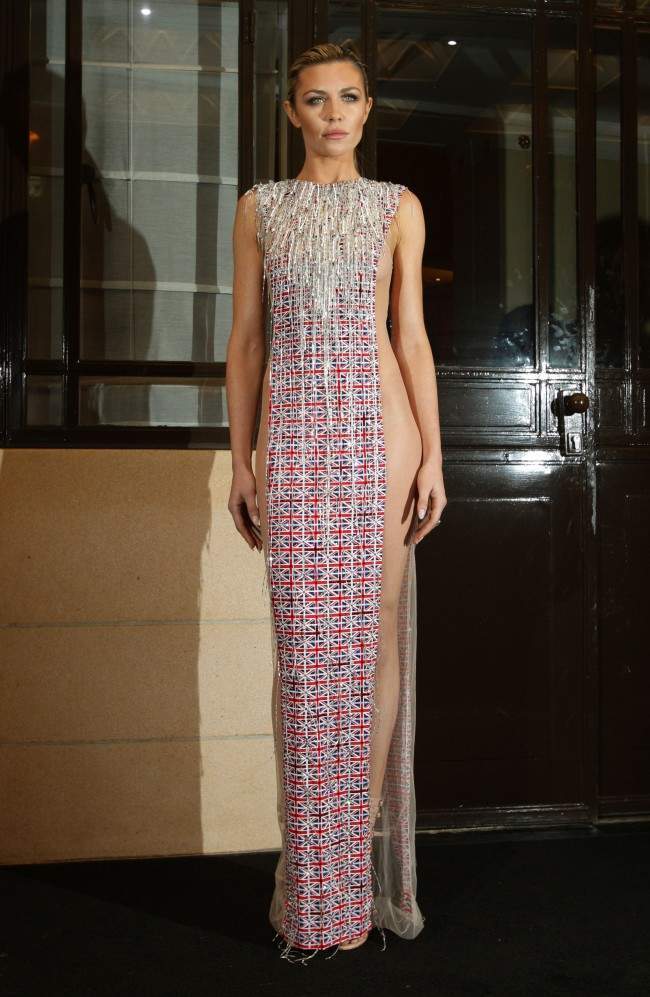 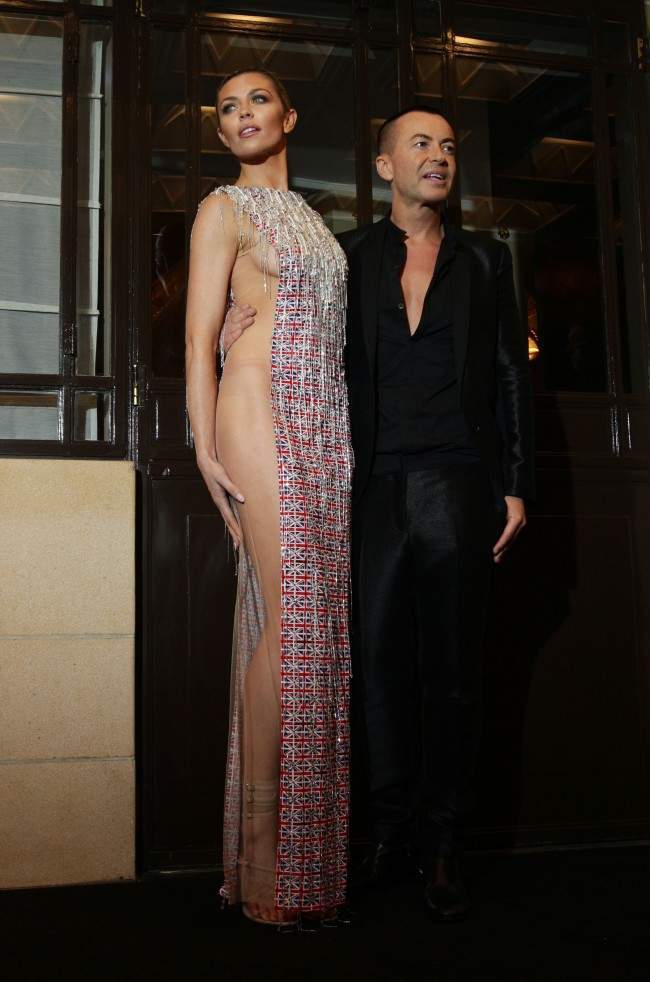 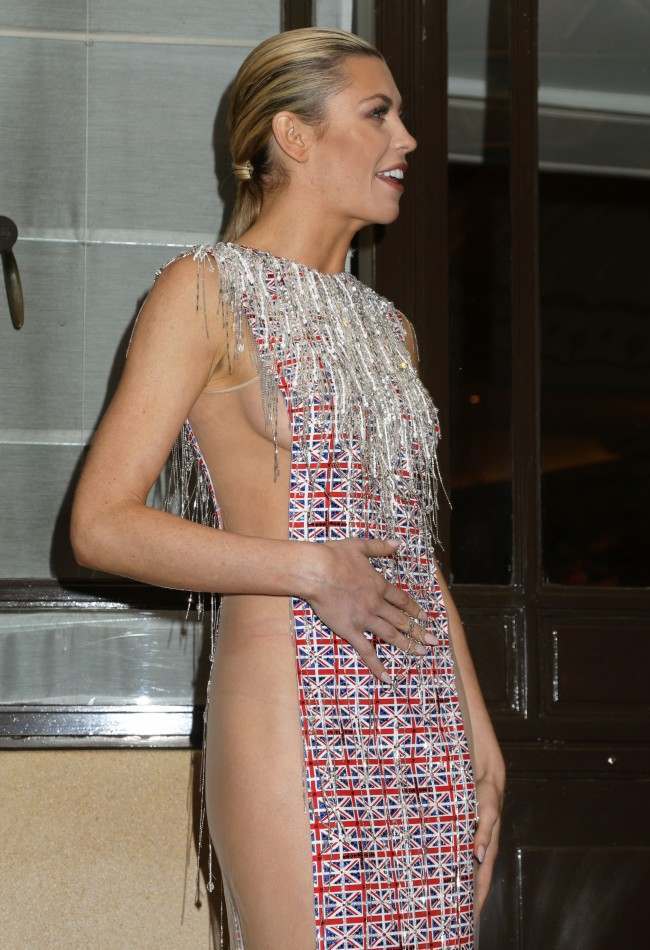 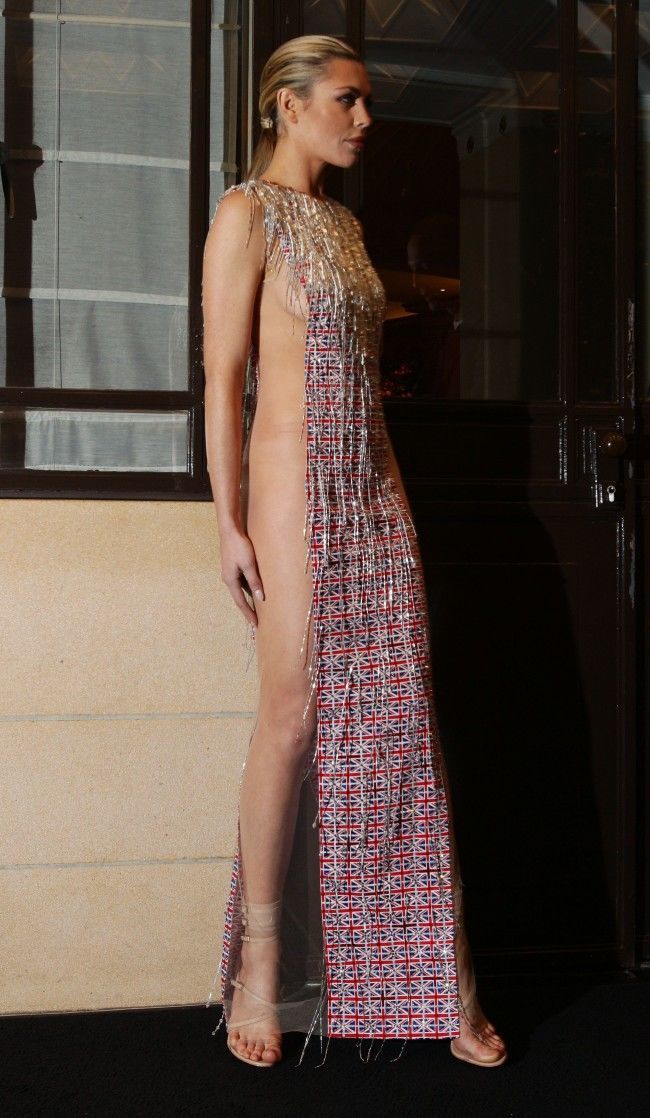 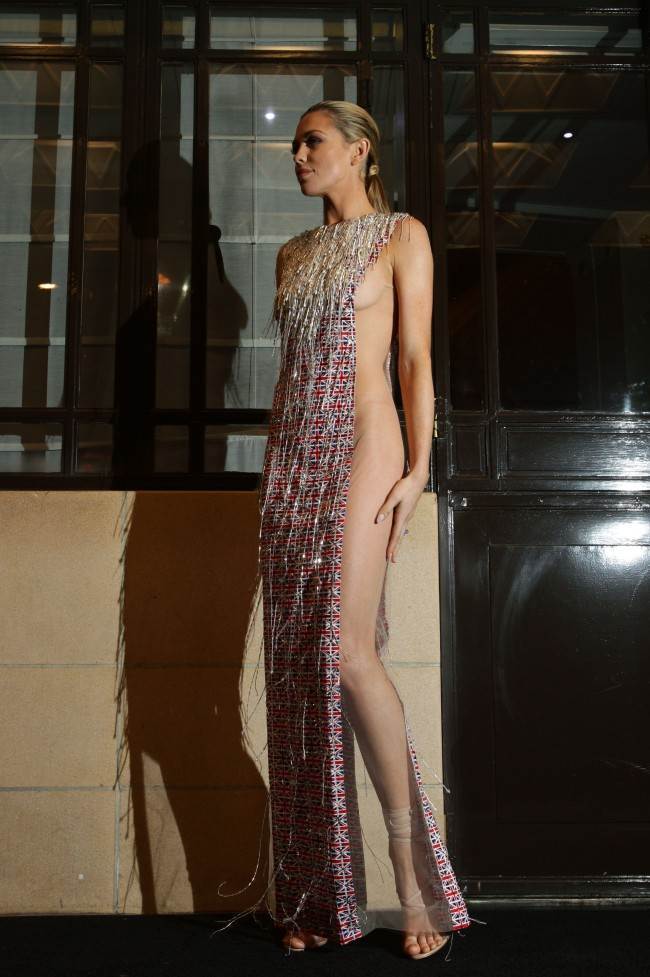 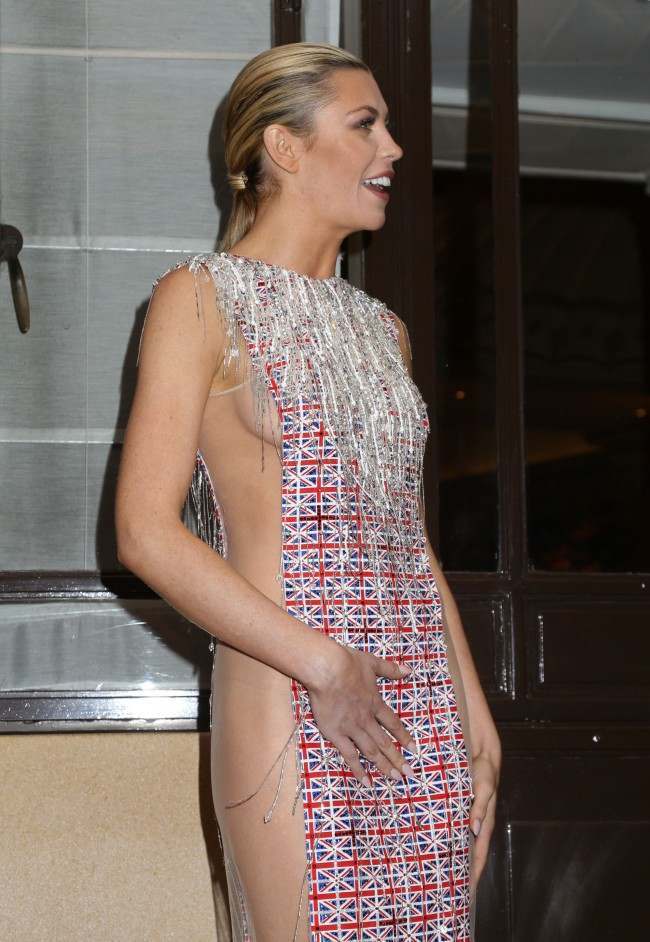 The Woman From Volantis: Lady Gaga Shows Us Her Flying Dress 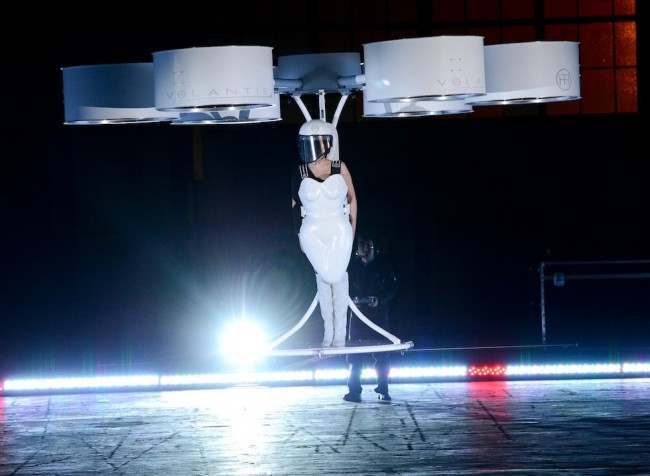 TO herald the release of her album ARTPOP. Lady Gaga stood at New York’s Brooklyn Navy Yard and showcased the Volantis transport prototype “flying dress.”  She said: “Although she is a vehicle, she, is essentially a metaphor for me.”

She is her own biggest fan.

EVERYDAY Sexism: Anorak harks back to the 1972 book The Golden Hands Complete Book of Dressmaking.

What is ‘Golden Hands’ in the pink neckerchief thinking? That if he pretends to be “a good dresser” or a “poof”, as the 1970s language had it, the woman won’t mind his appraising her chest? Maybe. Don’t knock it, dudes. Wind the clock on a few decades and raging heterosexual shagger Gok Wan is undressing women on telly and telling them how to look good naked.

Remember: no-on on TV is gay. It’s all an act. After all, if lesbians were popular, you’d see a lot more of them on the magic box.

TO Kansas, where 13-year-old eighth-grader Skylar Davis has been suspended from Anderson County Senior-Junior School for carrying a Vera Bradley handbag. Girls carrying the bag do not get rusticated. Just the boys do.
Says Skylar: “I don’t think everyone should be treated differently. Everyone should have the same privileges. It expresses myself and I think everyone else can wear it, so I wear it as well.”
Assistant Principal Don Hillard summoned Skylar to his office. Remove the bag or else, he said. Sklyar chose ‘else’. 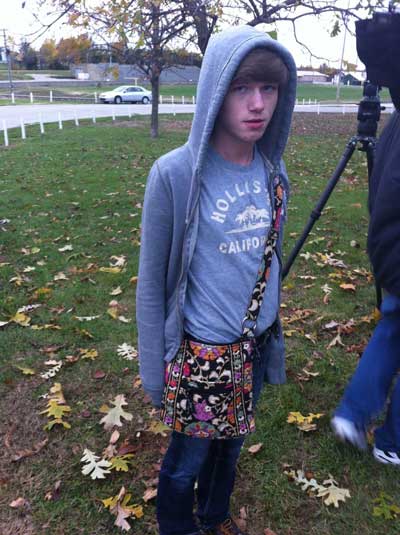 END_OF_DOCUMENT_TOKEN_TO_BE_REPLACED

‘Jesus, This Is What The Sunday Times Thinks Hipsters Look Like’

AS Gideon Defoe puts it: “Jesus, this is what the Sunday Times thinks hipsters look like”. It’s Johnnis Boden and The Bodenios: 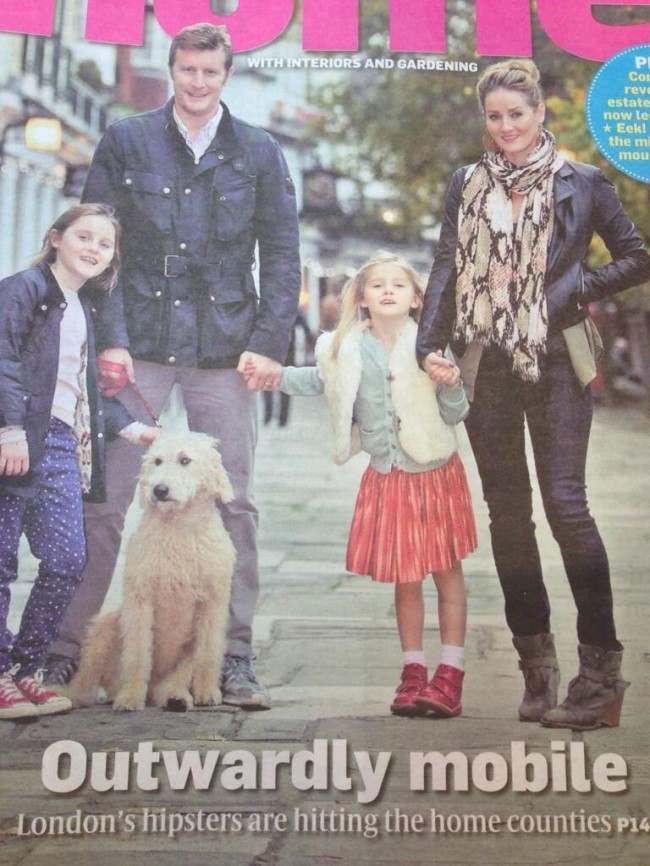 FOOTBALLERS, bless ’em, haven’t worked out the ideal formula involving brains, fashion and money. Everyone remembers Liverpool’s white FA Cup suits and eyebrows were raised when Davey Beckham wore a sarong… and not as many remember John Barnes’ ‘bird shit jacket’ he wore as a presenter on Channel 5.

However, the worst decisions footballers make tend to involve their hair. And in the Premier League, we’ve been blessed with some players who make mystifying decisions.

Here, we look at some of the ones you may have forgotten.

END_OF_DOCUMENT_TOKEN_TO_BE_REPLACED

MEN’s fashion is always up for a laugh. Anorak advises keeping it simple and always tucking your vest into your Y-fronts. Jessica Saia has created this guide to men’s fashion. Spotetr: bold italic

END_OF_DOCUMENT_TOKEN_TO_BE_REPLACED

Shreddies: The Men Knickers That Filter Your Bottom Burps 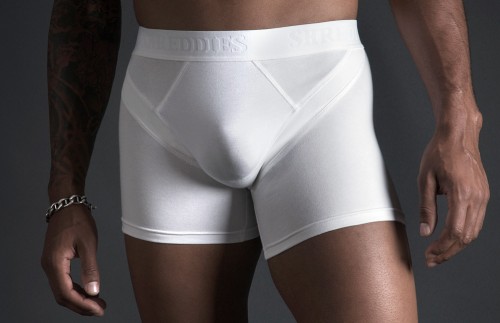 LEICESTERSHIRE’S Shreddies Ltd. brings us knickers and pants that filter your farts.

The thin and flexible cloth, which contains Zorflex® — the same activated carbon material used in chemical warfare suits — is reactivated simply by washing the pants. Shreddies say through extensive testing the carbon cloth could filter odors 200 times the strength of the average flatus emission.

END_OF_DOCUMENT_TOKEN_TO_BE_REPLACED 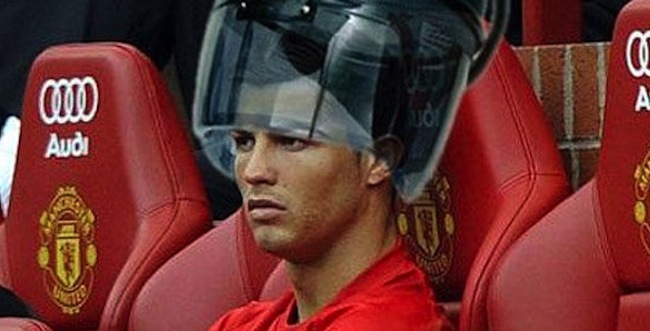 In case you are still undecided as ty the merits of walking in Ronaldo’s shoes, the official Nike blurb, courtesy of design director Denis Dekovic, should seduce you

“The concept of a star that burns brighter than others reflects Cristiano’s style, speed and the idea that as a player he plays without limits, much like the outer reaches of the galaxy. What Cristiano is able to achieve on the field is something that we felt was limitless. So we took that direction and focused on creating a highly luxurious finish fused with modern print and colour choices.”

END_OF_DOCUMENT_TOKEN_TO_BE_REPLACED

WE are indebted to D-listed for pointing us towards  LA’s FashionMinga.com.

WHAT IS FASHION MINGA?

Is it a fashion site for mingas?

Fashion Minga is a collaboration of designers, performers, and tastemakers coming together to celebrate the various components that inspire fashion: music, dance, color, shape and visual elements.

“Minga” is an Ecuadorian term for “a community coming together to work for the benefit of all”.

So. It isn’t just a British term for, as the Urban Dictionary defines:

END_OF_DOCUMENT_TOKEN_TO_BE_REPLACED 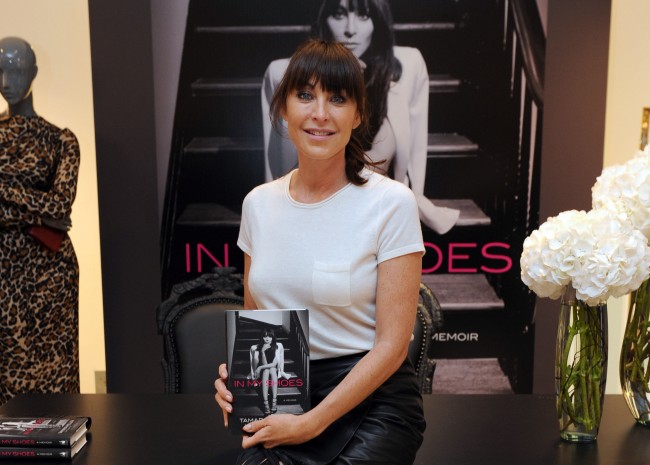 IN My Shoes: a Memoir by Tamara Mellon with William Patrick, tell the story if the woman who helped Malaysian cobbler Jimmy Choo become a to-die-for brand of the well-heeled. The book might be subtitled Putting Leboutin (geddit?) because Mellon has a few bon mots about her business partners and lovers.

A few highlights from her chat with the Times’s Stefanie Marsh:

“In the New Year. I will give interviews and talk about the MONSTER Private Equity has become and the VULTURES that operate in it.”

END_OF_DOCUMENT_TOKEN_TO_BE_REPLACED

I want a PSYCHEDELIC CAT SWEATER 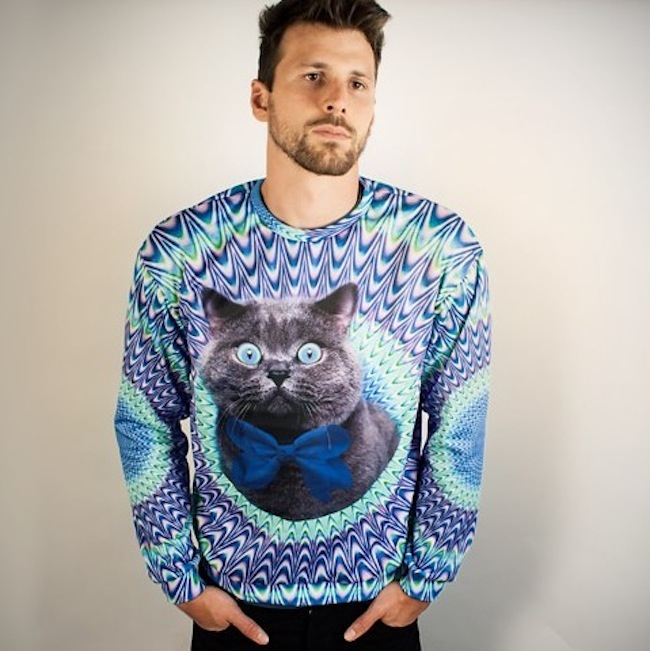 END_OF_DOCUMENT_TOKEN_TO_BE_REPLACED

How Barack Obama, Michael Jackson and Britney Spears can help you evade the NSA and Facebook spooks

HOW can you prevent your face from being known by the authorities searching the American-corporation-owned web? Wear a burqa. A beard? Be old and grey (the ultimate invisibility cloak)? Dutch designer Simone C. Niquille has an idea how you can dodge facial-recognition software: wear clothes covered in pictures of other people. Her “REALFACE Glamoflage” T-shirts are great. She says:

“I was interested in the T-shirt as a mundane commodity. An article of clothing that in most cases does not need much consideration in the morning in front of the closet…I was interested in creating a tool for privacy protection that wouldn’t require much time to think in the morning, an accessory that would seamlessly fit in your existing everyday. No adaption period needed.” 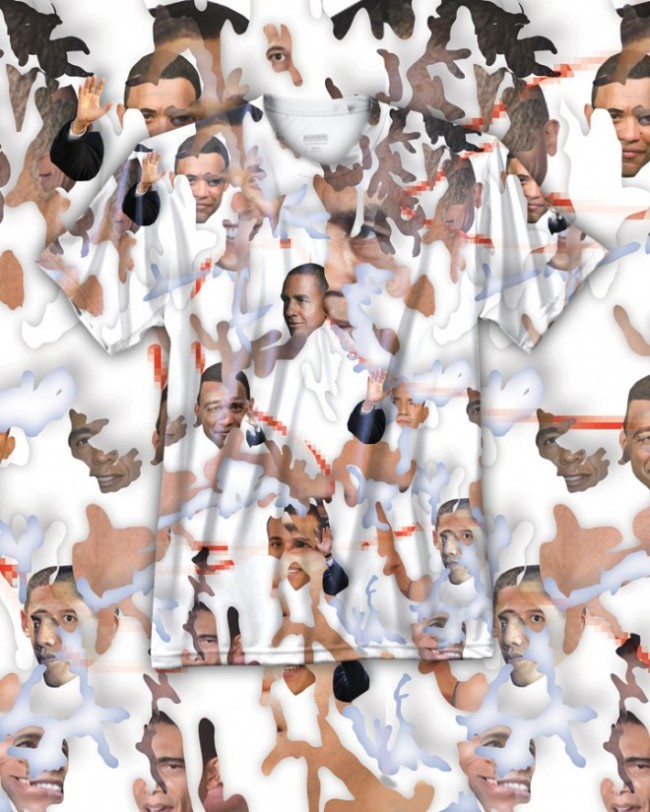 END_OF_DOCUMENT_TOKEN_TO_BE_REPLACED

A guide to Acceptable and Unacceptable facial hair

Here is one of the illustrations I did for Nick Offerman’s new book Paddle Your Own Canoe: One Man’s Fundamentals for Delicious Living.

So stoked to be sharing this with everyone. Had a lot of fun working with him on it. He’s the best. 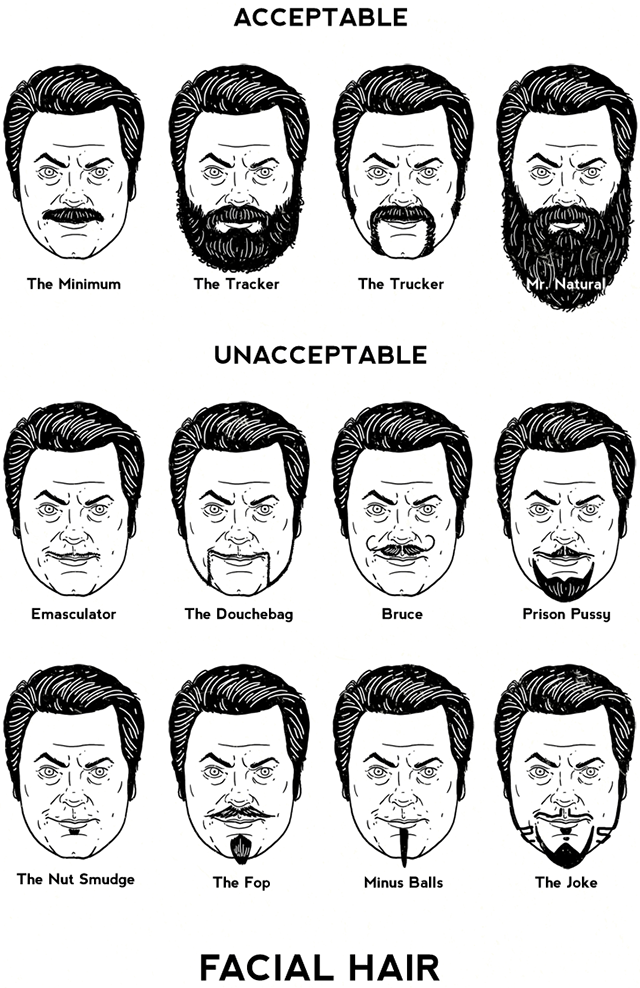 THE media love former Barcelona coach Pep Guardiola. But what did the current Bayern Munich coach look like as his side beat Manchester City?

Midway through the first half Pep Guardiola withdrew a notebook from the breast pocket of his classic, threequarter-length navy jacket… [he]looks like a man who has just walked off the set of a fashion shoot for GQ magazine.

Guardiola, a refugee from a Hugo Boss campaign…

He’s stylish. Or as the Daily Mirror see it:

“With his slate-grey woolly jumper and matching regulation drainpipes, Pep Guardiola looks all the world a bemused teacher on a school outing”

Such are teh facts…