The Girl With the Dragon Tattoo: Hollywood Remakes It Better

NIELS Arden Oplev, director of the orgianl screen verison of Stieg Larsson’s The Girl With the Dragon Tattoo Oplev is not happy with the Hollywood version. For one thing, he’s not directing it. For another Noomi Rapace is unlikely to reprise her role as Lisbeth Salander. Rooney Mara is looking to gt the nod. He tells Word & Film:

“The only thing that’s annoying to me is that the Sony PR machine is trying to make their Lisbeth Salander the lead Lisbeth Salander. That’s highly unfair because Noomi has captured this part and it should always be all her. That’s her legacy in a way I can’t see anyone competing with.

“I hope she gets nominated for an Oscar. I know a lot of Academy members have seen the film and liked it because every time I go to LA I meet so many people who have seen my version of it. Even in Hollywood there seems to be a kind of anger about the remake, like, ‘Why would they remake something when they can just go see the original?’ Everybody who loves film will go see the original one.

“It’s like, what do you want to see, the French version of La Femme Nikita or the American one? You can hope that Fincher does a better job.”

END_OF_DOCUMENT_TOKEN_TO_BE_REPLACED

Obama Is An African: And Other Great Bootleg DVD Covers (Gallery)

BOOTLEG DVDs are only exceeded in kwality by their covers. Birthers will love “OBAMA: African In The White House”. What of Buffalo Soldiers, the review for which tells us: “Irritating and toothless.” There’s a Lord of Ring – Harry Potter mash-up, for when one huge film is not enough… 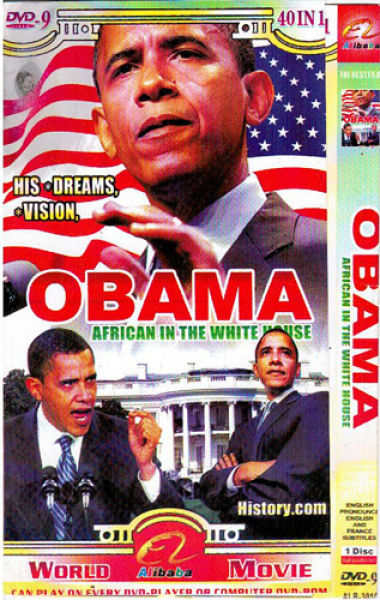 OBAMA: African In The White House

AMY Childs is the Star of The Only Way In Essex, a fictionalised fly-in-the-tanning-gel look at Essex youth.

This show has already earned some great reviews, like this from the BBC’s Denise Winterman:

It’s [Essex] arguably the most-maligned 1,300 square miles in the UK.

Well, yes – arguably. And Newcastle is a different shape.

END_OF_DOCUMENT_TOKEN_TO_BE_REPLACED

Bruce Springsteen Photos: The Promise: The Making Of Darkness On The Edge Of Town

BRUCE Springsteen was at the screening of The Promise: The Making Of Darkness On The Edge Of Town at the BFI Southbank in London. The film is the story of how ‘The Boss’ wrote 70 songs for his famous album. Fans will love it. After the trailer a collection of pictures from the star now and when he was in his pomp… 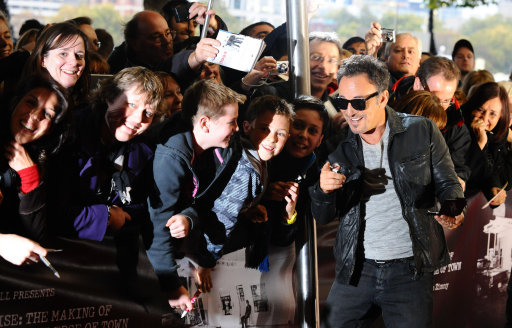 Bruce Springsteen arrives at the screening of ÔThe Promise: The Making Of Darkness On The Edge Of Town' at the BFI Southbank in London. 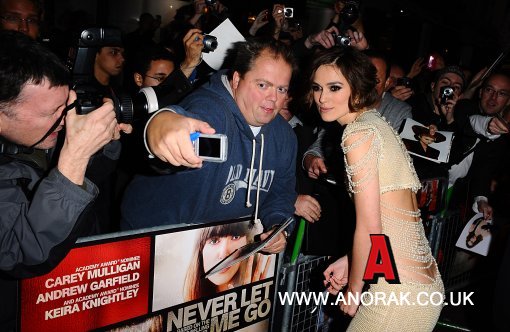 Keira Knightley poses for pictures as she arrives for the European premiere of Never Let Me Go at the Odeon Leicester Square, London.

IT’S not too late to buy Darth Vader’s original costume in time for Halloween (2011) or the Christmas party. The Star Wars outfit was made for The Empire Strikes Back in 1980. One small issue – it’s expected to sell for up to £230,000 at Christie’s showroom in South Kensington, London. You might to be a bit more creative. Fetch the toilet role tubes… 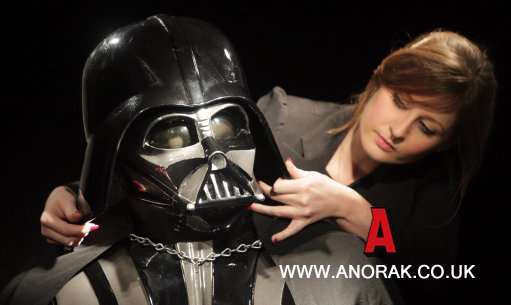 Christie's employee Caitlin Graham adjusts an original Darth Vader costume, that is expected to sell for up to £230,000 when it is put up for auction next month, at the Christie's showroom in South Kensington, London.

THE film about the 33 Chilean miners’ rescue from the San Jose mine is in the making.

The merchandise is being showcased.

The uphill bobsleigh team is being made ready for the winter Olympics.

All we need is a title. And who plays Yonni Barrios?

Hilary Swank Dazzles At Conviction Premiere: Oscar’s In The Bag

54th BFI London Film Festival: Two-time Oscar winner Hilary Swank dazzled with a nod to Jimmy Savile’s love of gold lamé at the premiere of Conviction. This one might give Swank another Oscar.

It’s based on the true story of Betty Anne Waters, who devoted her life to freeing her brother, whom she believes has been falsely convicted of murder. Says Swank: “You don’t have any control over (awards), so you just do your work.” But you do get to pick the scripts… 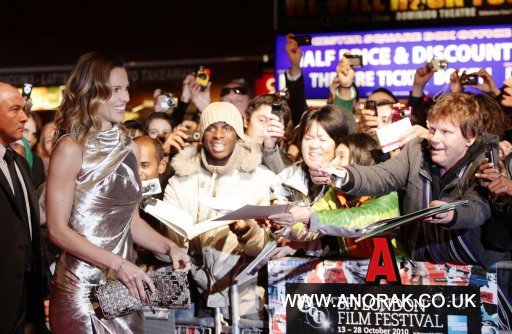 Hilary Swank greets fans at the premiere of Conviction, during the 54th BFI London Film Festival, at the VUE West End in central London. 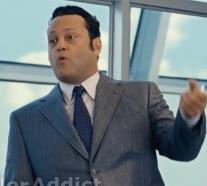 VINCE Vaughn wants the gays to lighten up and take the joke at their expense. In his new film, The Dilemma,Vaughn’s character – who like Vauhgn is white and straight – says:

“Ladies and gentlemen, electric cars are gay. I mean, not ‘homosexual’ gay but ‘my parents are chaperoning the dance’ gay.”

That was the film’s trailer. Anyone who found it funny and wanted to see the film on the strength of the gag alone will be disappointed to learn that the joke has been expunged from the film’s new trailer (original one is below).

Presumably, the joke still exists in the film. But we reserve the right to be offended and call on cinemas to equip each person in the auditorium with a remote control. If over half press “SKIP GAY“, the gag will be skipped. The system will be adapted for other films – a “PAUSE” button for nude scenes; a “REWIND” button for, er, nude scenes you might have missed; and a “MUTE” for Mel Gibson’s lines.

It’s a huge media shitstorm into which CNN’s Anderson cooper (gay) wades in on “The Ellen DeGeneres Show”:

“I was sitting … in a movie theater over the weekend, and there was a preview of a movie, and in it the actor said, ‘That’s so gay.’ And I was shocked … not only that they put that in the movie, but that they put that in the preview, they thought that was okay to put it in the preview to the movie to get people to go and see it. We gotta do something to make those words … unacceptable, ’cause those words are hurting kids.”

“The use of the word ‘gay’ in this trailer as a slur is unnecessary and does nothing more than send a message of intolerance about our community to viewers.”

What says Vince Vaughn, star of films watched by people who don’t see or crave meaning in anything? Well, (via Deadline):

“Let me add my voice of support to the people outraged by the bullying and persecution of people for their differences, whatever those differences may be. Comedy and joking about our differences breaks tension and brings us together. Drawing dividing lines over what we can and cannot joke about does exactly that; it divides us. Most importantly, where does it stop.”

To your keypads, viewers. The Dilemma is on. Press the “SHOULD HAVE SEEN SOMETHING ELSE” button now!

Vaughn wants the gays to lighten up and take the joke at their expense. In his new film, The Dilemma,

KEIRA Knightley, Carey Mulligan and Andrew Garfield rocked up for the European premiere of Never Let Me Go at the Odeon Leicester Square, London. Knightley once told Allure magazine:

“I hate red-carpet events; I absolutely hate them. I don’t like the fact that people write, ‘Oh, you look like crap’ in print. Or ‘I don’t like your arms!’ ”

“I’m not Wonder Woman. I have self-esteem problems. Everybody does. You know, skinny people are allowed to feel shit about themselves.

“I haven’t got a clue about how much I weigh. I do not own any scales.”

END_OF_DOCUMENT_TOKEN_TO_BE_REPLACED

TO the premier of the cartoon film Despicable Me at the Empire, Leicester Square, London. Russell Brand give voice to a character called Dr Nefario, a criminal mastermind.

He also wore a pair of short stilts on his feet – Tom Cruise own-brand – and was interviewed by Jenni Falconer, an experience akin to having your ear rubbed along a wet bubble of washing up liquid.

Also there were a cluster of celebrity liggers and… Anneka Tanaka-Svenska. We have no idea who she is and fining out will only spoil the thrill of a name dreamt up by a Nippon-Scandinavian law firm… 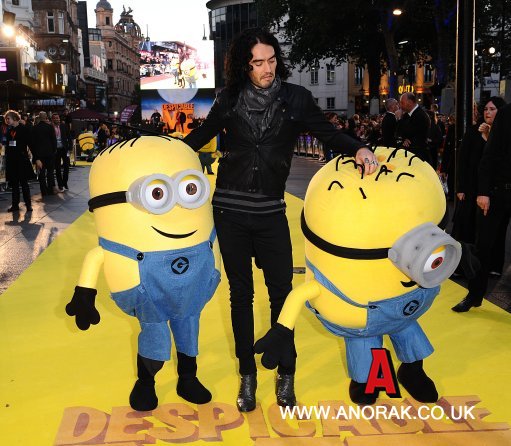 Russell Brand arriving for the European Premiere of Despicable Me at the Empire, Leicester Square, London. 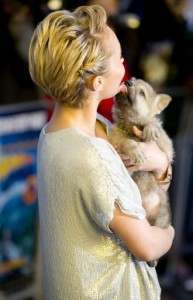 HAYDEN Panettiere is to portray Meredith Kercher’s murderer Amanda Knox in a chocolate box film TV called The Amanda Knox Story. In what still passes for reality, Raffaele Sollecito, Rudy Guede and Knox sexually assaulted Kercher and slashed the British girl’s throat with a knife in Perugia. That was way, way, way back in 2007.

Knox got 26 years jail – Sollecito was sentenced to 25 years while Guede got 30 years. Guede, who is black and from the Ivory Coast has not been heard of. But Knox, who is blonde and American, is a cause celebre for anyone wanting to bash the Italians and tap into a bit of sexy-drug-fulled scandal.

So. Can a young, fit, sexually active American be a murderer in a picturesque setting with coffee shops and an aqueduct? Well, yes.

Can a TV company make some cash and fiction from a girl’s brutal murder? Can it open up the story to a  debate? Yes. It’s already begun. Get a load of this from the Telegraph:

Colin Firth is to play a journalist investigating the mystery surrounding the murder of British student Meredith Kercher.

END_OF_DOCUMENT_TOKEN_TO_BE_REPLACED

127 Hours Trailer: James Franco Is Cut And Alone With His Little Franco 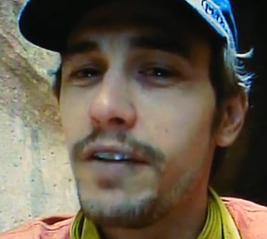 JAMES Franco is the star of 127 Hours, the Hollywood-treated story of Aron Ralston, the climber who severed his own arm to escape being wedged in a mountain.

Franco is just about the most likable leading man right now. In the film, a bored and stressed Ralston masturbates. As is the way with all trite film interviews, the hack wonders how alike the star is to the character he plays. Franco amuses himself:

THE Social Network – aka the Facebook Movie – arrived in London. We went to see Aaron Sorkin, Jesse Eisenberg, Andrew Garfield and Justin Timberlake at a photocall for The Social Network at the Dorchester. As for the film, The Daily Beast’s Rebecca Davis O’Brien, says the film’s women who serve Facebook CEO Mark Zuckerberg are “doting groupies, sexed-up Asians, vengeful sluts, or dumpy, feminist killjoys.” But not media whores? Why does the new media hate women as much as the old media? 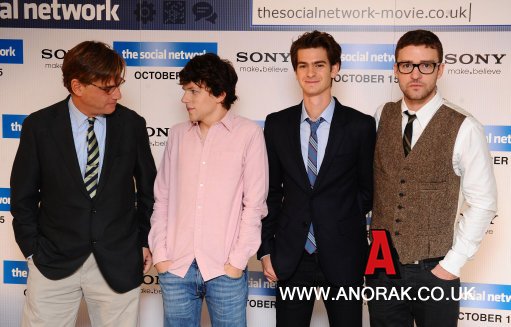 (left to right) Aaron Sorkin, Jesse Eisenberg, Andrew Garfield and Justin Timberlake at a photocall for new film The Social Network at the Dorchester in London.